On water, public space and equality

Cécile Backès reflects on the Meet the Neighbours symposium at Le 18 in Marrakech.

Four days in Marrakech for the On common[ing] visions symposium organised by Le 18, one of the Meet the Neighbours partner organisations. Four days of sun, light and conversations on riad terraces… My thoughts accelerate with each exchange – what can we offer the people we’ve met through our residencies back at la Comédie de Béthune, now that we’re neighbours? I think pell-mell about a mixed group of inhabitants; a theatre visitor status; individual creativity; of relocation... to move, to change space and scenery, essential gestures for inhabitants. For neighbours. For artists like those invited for residencies by Meet the Neighbours. For everyone, actually.

So, we spend a few days at Le 18, a multidisciplinary cultural riad where creation, exchanges and reflection bring art and its practices into a neighbourhood setting: that of the Riad Laarouss district, in the Medina of Marrakech. One morning, we go for a guided walk in the local streets led by Fatima and Maha, director of the Dar Bellarj Foundation. The subject of the walk is water. On a small triangular square, they tell us the history of this fountain; the municipal decision to stop its use; Fatima's childhood memory of the time when water flowed in the fountain and the women and children of the neighborhood gathered around it; when it was the heart of the square. The walk continues, and we follow them to Dar Bellarj. I turn to look at the ghost-fountain behind me. Two teenagers have sat down on its edge, intrigued by our presence, as if, all of a sudden, the fountain-object had recovered importance in their eyes. Thus, with encounters and public conversations, the memory of the fountain does not die out.

Dar Bellarj is a large square house built around a courtyard paved with white marble, adorned by a small lively fountain in the centre. We are introduced to Jérôme Giller’s work, an artist who is in residence at Le 18 as part of Meet the Neighbours. Jérôme worked with the woman weavers of the Angouan cooperative (Aït Ourir) to design and weave a unique carpet. Jérôme shares some of the secrets of traditional weaving. The making of a carpet is deeply linked to notions of fertility, that of the earth and that of man. Jérôme and the group of women therefore chose to work on the theme of water. Again, water. Water, the artistic and political subject of the Qanat project, which brings together a network of partners including Dar Bellarj and Le 18. In fact, the image of water flows on this carpet. Exhibited on the first floor of the Dar Bellarj Foundation, the carpet is on the floor. The stages of the process of its creation are displayed on the walls: the selection of materials and the development of the design – a small stream flowing to a lake like a water snake, shrub branches on each side that bloom ears of corn; yellow, brown, red and that pale bright blue that bursts on the raw background of the carpet. Around, there are videos of women weaving. Where are they, the women of the cooperative? I wonder. I later learn that we will meet them tomorrow.

Back at Le 18, we settle in the room at the centre of the riad to exchange with several artists invited by Francesca Masoero and her team. Small tables, computers, cables, microphones, a screen – everything is ready. But this room is also that of the kitchen. Behind the tables, behind a counter, a woman prepares a tajine. The clatter of her knife, the sound of the tap water, that of the plates and dishes she moves – the music of everyday life punctuates the activity.

The guests of the symposium start speaking: Abdellah M. Hassak, the musician who composes ‘sound clouds’ in cities; Noureddine Ezzaraf, who seeks to draw an imaginary city from images of landscapes and interviews with family and friends; Anna Raimondo who imagines sound performances on the invisibility of women; and then Richard Gregory briefly introduces the Meet the Neighbours project. He writes a sentence on the paperboard, a question that is dwelling on his mind: What happens when an artist works as a neighbour? 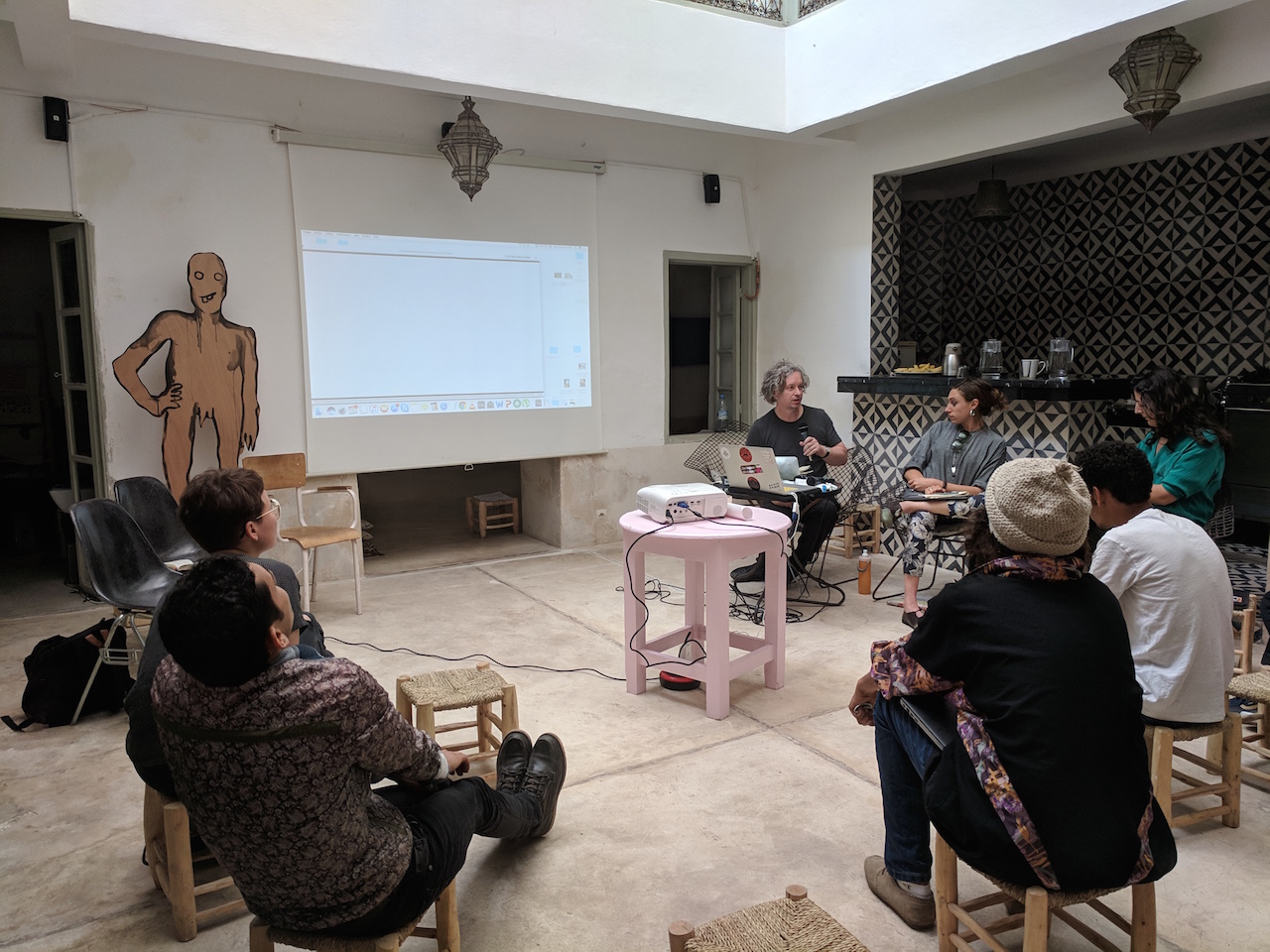 The following morning, the program continues: Jeanne van Heeswijk, a Dutch artist who arrives for a residency at Le 18, speaks at length about her different experiences in Philadelphia, New York, Rotterdam. Each time, her work takes different forms: installations, objects, conversations in public spaces... but she always looks for ways to connect local residents to the creation process and to listen to how they describe their lives. Jeanne asks: How can we define and nurture a policy of relations with the inhabitants and the public? What are the possibilities for maintaining a long-term relationship with the people in this group?

I love these questions! I translate right away: a long-term relationship with the inhabitants. They immediately prompt me to think about each person’s individual creativity, and direct me towards other questions: how can we, artists, write our work into the sign of duration? How can we make works that last?

In the afternoon, we attend a public meeting in Dar Bellarj as part of Jérôme Giller’s project with the cooperative. The courtyard is covered with dozens of chairs and in the centre the fountain is lined with floating rose petals. Little by little, the women arrive, in threes and fours, greet one another, smile, talk, laughter erupts, glasses of tea and cakes circulate. They are a hundred or so and we, the ‘neighbours’, are scattered throughout the assembly, here and there. Dresses of all colours next to our white legs; our covered shoulders, our hair shining in the sun.

Francesca, Jérôme and Maha quickly give the floor to Rachida, founder of the cooperative, to tell the story of the project and to introduce her fellow weavers: the very old woman with the dark and lined skin; the youngest who was looking for a hobby while waiting for a husband and is now so passionate about her work at the cooperative she would not leave it for anything in the world; the third, secretive and quiet. The questions emerge from the room: “And what do you do now, Rachida, are you still weaving now that you're your own boss?” Rachida smiled: Yes, she still weaves. She proclaims her happiness in being independent; to have blossomed in the completeness of the life that she has built herself.

A word emerges in my mind: empowerment. An American word present in some French networks at the moment. In Quebec it is translated as autonomization – a word whose presence is strange here, but which nevertheless defines the phenomenon of which Rachida speaks: giving more power to individuals or groups to influence their social or economic conditions. I’m surprised to find this word here, in this clear marble courtyard where the water flows from a fountain decorated with rose petals – and yet, yes, that’s it. We are talking here and now of empowerment, of the development of power and therefore of emancipation. Of women, in this case.

We did not talk about this topic between partners, later on. Yet, I tell myself, this is an important social issue in my work in France. At la Comédie de Béthune, we are implementing equal programming between women and men artists, equal means of production and residencies, as well. In France, professional equality is a subject that agitates the whole of society. A few years ago, the sphere of public culture discovered with astonishment its own inequalities, which nobody seemed to have been aware of. Stuck in a vicious circle of self-censorship of female artists and unconscious mechanisms of male domination, the cultural milieu has had a brutal awakening – it’s still in progress. But since then, in the wake of the speeches and the demands of the #MeToo movement, professional equality has become a major topic. With it, other issues in society are surfacing, including the place given to LGBT movements and gender issues.

We may not have enough time to discuss the richness of these approaches, all situated in the heart of Meet the Neighbours. But that’s how it is. We will at least have met there. The ideas have been shared, and each ‘neighbour’ will interpret and question them according to their own context of work... it is one of the rules of this exciting game.