Béthune is located in the Pas-de-Calais region of Northern France. Part of a larger agglomeration of over 100 towns and cities, Béthune is located within 15km of two similarly sized cities, Bruay-la-Buissière and Lillers. Combined, they have a population of around 60,000 and Meet the Neighbours (MTN) projects were delivered in all three. The region was shaped by the discovery of coal in 1849 and the expansion of the mining industry. Its decline in the second half of the twentieth century brought with it significant social and economic challenges and the area is still characterised by high unemployment and low levels of educational attainment. Of equal significance is the challenge to local and regional identities as the nature of work and industry that brought many families to the area is transformed. As Cécile Backès, Director of Comédie de Béthune, explained: “The question here is how to invent or reinvent a new purpose or perspective for this territory.”

Béthune is the main cultural centre in the area. Conventionally a producing and receiving house, Comédie de Béthune’s programme focusses on contemporary performance, physical theatre and dance. Nathalie’s work as Manager of Regional Projects involves working with cultural partners in the region to tour adapted versions of performances developed for Comédie’s main stage. MTN was the first time the organisation had worked with non-cultural partners to develop work for contexts outside the theatre building.


Comédie’s audience are from relatively consistent social and economic backgrounds, and the theatre was interested in MTN as an opportunity to build relationships with sections of the population that weren’t engaging with their programme, to better understand the barriers that limit access to cultural opportunity in the region, and to develop a closer relationship between the work of the theatre and the lives and experiences of residents.

Nathalie worked as an interlocutor for the project, building relationships with representatives in each of the three sites that helped support and advance the delivery of the project. As she explained: “I know if the partner is not excited by the project, or not invested, it is too difficult for us, so the partner is very important.”

Some of the relationships that supported the residencies began years in advance of the project. For instance, the partnership with the company that manages the Breynaert estate developed following meetings between the theatre and several social housing organisations in the city. Sabria, Manager of Urban Social Development for the organisation, expressed a clear interest in supporting the project's aims and an understanding of the value of bringing artists into communities in the city:

“Sabria immediately said: ‘Near Comédie de Béthune there is a building where it's very poor and not well seen, and a cultural project could be very good for this site.’ So immediately they said: ‘Yes, we will work with you,’ and immediately she proposed an apartment.”

Each of three sites, represented an opportunity to work with different groups within the local population and required a nuanced approach that built on the local partner’s existing relationships with residents. To support these relationships, Nathalie made links between partner organisations and artists whose work related to or supported their aims. In line with the approach of MTN as a whole, these were not necessarily artists who saw their work as addressing specific social challenges but rather artists who use creative practice to pursue similar goals to those of the partner organisation.

For instance, the artists invited to take up residence on the Breynaert estate – performance companies Théâtre de La Licorne and La Bande Passante – both have creative practices focused on making links between otherwise isolated sections of the population. The residents of the estate describe it as divided into different ‘clans’ that are generally hostile towards one another. The performance companies engaged residents in a range of socially engaged creative practices, including an aural history project, a street party, mural making, street theatre and musical performance. As one resident explained, the projects reframed the social environment of the estate and gave residents “a reason to be proud”. 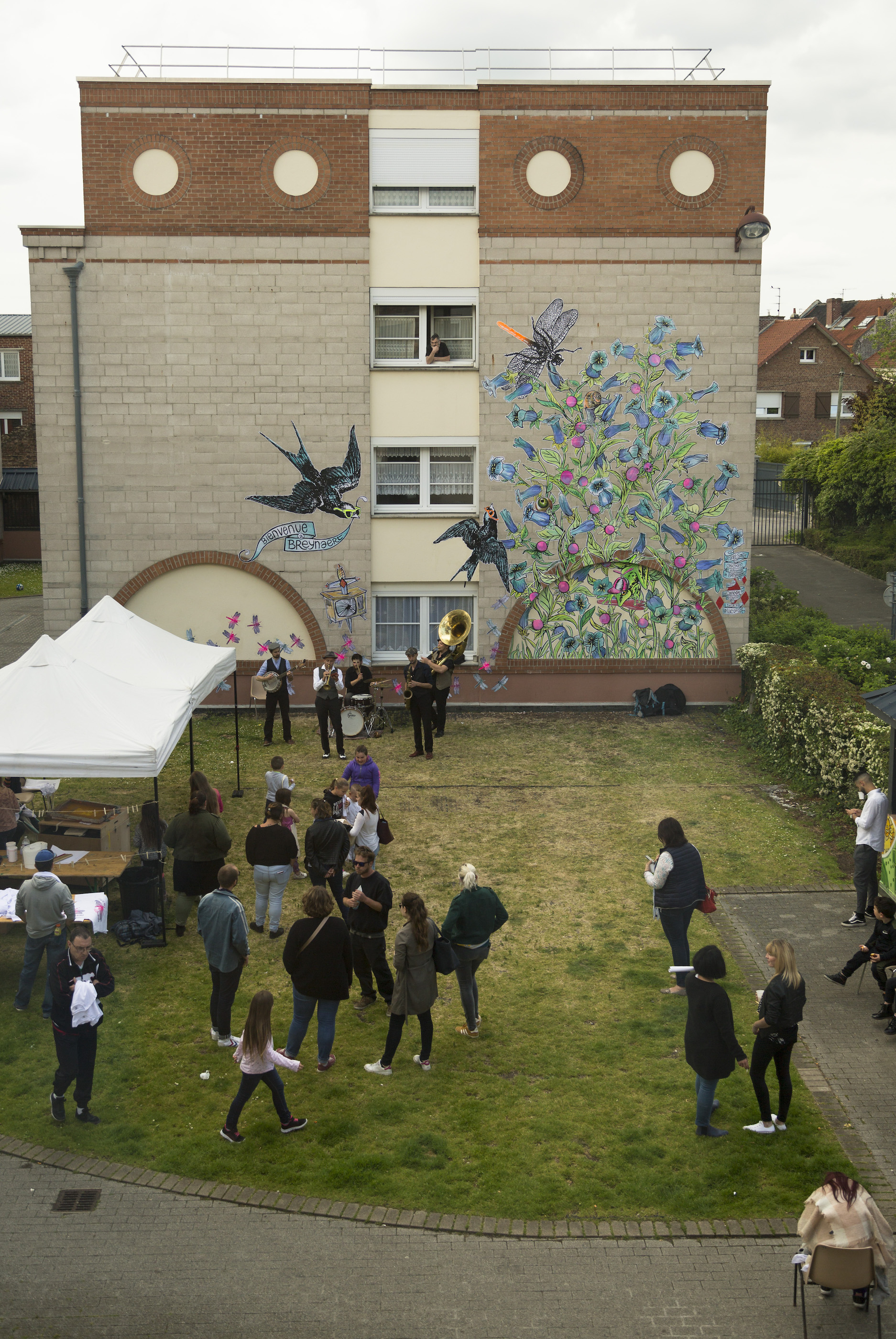 MTN has had a lasting effect on Comédie de Béthune’s relationship with residents in the region and has impacted how the theatre will develop its programme in the future. The groups involved in MTN residencies were entirely new to the theatre, and working in such an in-depth way with these communities has helped Comédie to develop an understanding of their backgrounds and experiences that will support future engagement. The decision to look beyond existing partnerships and to find new ways for the theatre to work with people and organisations has disrupted institutional convention and significantly expanded the community the theatre is able to involve in their work. As Nathalie explained: “If not, we would maybe have our habitual audience.”

Comédie began MTN with hopes of bringing new audiences into the theatre. This has been achieved. La Bande Passante, for instance, ended their residency with an invitation to Breynaert residents to see their new theatre piece at Comédie de Béthune. The event was well attended and the majority of people Comédie worked with were either not regular arts attenders or hadn’t previously visited Comédie de Béthune specifically.

MTN’s longer lasting outcomes include a shift in how Comédie understands its relationship to the people it might want to reach as audiences or participants in the future, and how the organisation practices audience development. They have developed greater understanding of the specific and circumstantial barriers to cultural participation experienced by different groups within the area. The residencies have highlighted a need for the theatre to adapt its traditional approach of inviting audiences to engage in an existing programme and to shift to a more responsive and collaborative way of working with communities.

The networks established during MTN provide a valuable resource with which to approach this task. Comédie has plans to organise a series of 'neighbours coffees' with participants across the region, to give the people they worked with an opportunity to directly inform how their relationship with the theatre continues in the future. As Nathalie reflected: “It's not the same way of working.”