Name: Mollie
Nationality: French
Occupation: Student
Location: Groningen, the Netherlands
Involvement with Meet the Neighbours: Mollie was invited to take up residence in the Grand Theatre, Groningen for two weeks in 2018

The city of Groningen is in the grips of a student housing crisis. There is not enough accommodation in the city to support a fast-growing student population and every year, hundreds of students move to the city to begin their studies with nowhere to live. The university manages the situation by turning any space it can into temporary accommodation, lining school halls with beds and erecting tents across campus to house the displaced young people.

Groningen’s student population has grown considerably in recent years and the crisis is reported to be affecting the population of international students the most. There is a friction between student culture, which is becoming increasingly internationalised (and mostly takes place in English) and the traditional Dutch culture of the city. Residents can feel uncomfortable with the ways in which student-centred development is changing the city, while students can feel isolated from the historic culture and character of the city.

Mollie moved to the city from France to study mathematics and was homeless upon her arrival. She was required to pay 12 Euros a day to sleep in a bed in a tent shared with thirty other students. After a week she managed to find a slightly better situation through a couch surfing initiative organised by local political student group DAG. It was DAG – working in collaboration with the Grand Theatre – that invited her to take part in Meet the Neighbours.

The Grand Theatre Groningen was looking for students affected by the housing crisis to take up residence in the theatre for two weeks, and to take part in an artistic project that would culminate in a performance examining their experience as recent immigrants to the city.

The residencies were an opportunity for the theatre to consider their response to the changing context of the city by opening themselves up to the influence of people who were already affected by these changes. Niek vom Bruch, Artistic Director of the Grand Theatre, explained they wanted to see how displaced students “would use this building; see how they would use this cultural organisation and institution for whatever they wanted it to be”. (Read a case study with Niek for further details.) 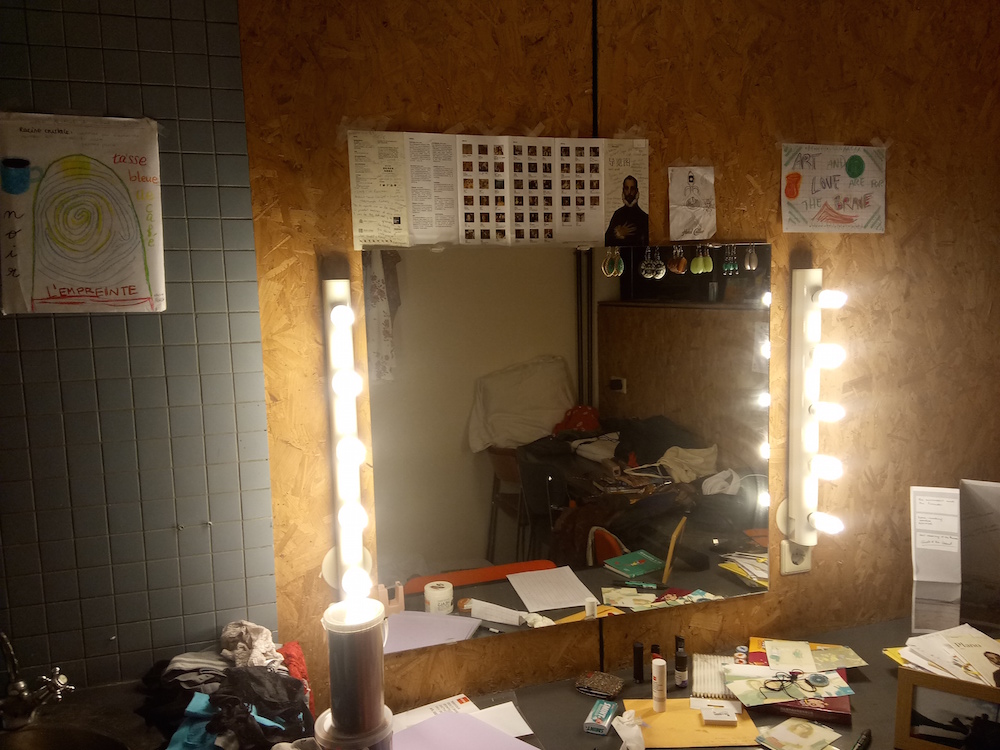 “It felt very romantic, to be honest. Because there's a big stage downstairs, in the dressing room where I was, they said, ‘if there's a show on you have to be quiet,’ because they could hear. So, if there was a show on, I’d climb up these old wooden stairs and go around behind the stage. It felt really cosy.

“And the kitchen was sort of, like, mine, because obviously out of working hours no-one's here. So, for dinner and stuff, I'm just cooking away in the kitchen with these massive frying pans – you know, group sized sort of things…

“Everyone at the theatre kept saying: you can come here, you can go upstairs, you can go to that room, you can sit here, because this is your home for this week. It was really cool. Everyone sort of knew – oh, this girl, she can go into any performance. There was always a seat for me.”

At the end of the two weeks, Sieger Baljon, a performance artist and frequent collaborator with the Grand, worked with Mollie and Leonardo to devise a performance that explored their experiences of living in the city.

The audience followed Mollie and Leonardo as they carried their belongings through the building, moving from one location to the next to examine different aspects of their lives as displaced students. Inspired by Talking Heads ‘This Must be the Place’, they built the piece around the song, interweaving autobiographical text with musical performance that explored their relationship to Groningen as their home.

The Grand Theatre’s balcony faces out on to Grote Markt, Groningen’s central square, and the piece made use of the theatre’s central location. With Sieger’s help, the performers translated some of their thoughts into Dutch and used the balcony to directly address the city, using a megaphone to amplify statements such as: 'By speaking English you shut me out.’

For Mollie it was a new experience. “I’ve never done anything like that before.”

The residency had high personal significance and value for Mollie. She describes it as “kick starting my life in this city”. Prior to the residency, she was struggling to form social connections, she had never visited the theatre before and had never performed publicly. Since the residency, she has maintained her connection with the theatre as a volunteer, something she describes as key to her life and happiness in the city, getting her out of the student bubble and helping her to learn Dutch. She now attends a monthly storytelling night, The Grand Pillow Society, and has spent two months in Iran as a result of connections made during the residency.

The project exposed Mollie to new kinds of theatre. Her previous experience with historical figures in the French curriculum, such as Molière, had convinced her that theatre wasn’t for her. However, the opportunity to see contemporary theatre at the Grand changed her perspective. So much so that she found herself advocating for the cultural value of her residency to visiting artists.

This is, in part, due to the openness of the Grand Theatre’s approach. Rather than using cultural practice to impart specific values, the Grand framed cultural participation as an opportunity for communication. Mollie and Leonardo were able to draw on the resources of the theatre to understand and articulate their own experiences, as students affected by the housing crisis. In turn, the Grand was able to better understand its own relationship as a neighbour to the diverse population of the city.

Similarly, the performance addressed the lack of connection between the University-led student culture/experience and the city itself. It provided an interface between the performers and Groningen residents, including theatre staff, audiences and the general public outside the theatre building.

Finally, the residency allowed Mollie to inhabit a 'Dutch' space and be read as a native Dutch person. This provided her with insight into how Dutch residents might feel about the large international student population in their city, and the role of language as a signifier for different cultural territories and groups even in nominally shared space.