Involvement with Meet the Neighbours: Iwona and Janek undertook two residencies: in the Juliusza Słowackiego estate in Lublin; and in Irwell Riverside, Manchester. (This case study focuses primarily on the Lublin residency.)

Lublin is a city in western Poland, about three hours’ drive from Warsaw. In line with the country as a whole, Lublin is experiencing a steep rise in right-wing nationalism, articulated through the reframing and resurgence of the Christian church as a crucible for conservative social values, and the increased policing of creative and political expression.

Within this context, the Juliusza Słowackiego estate has become a complicated symbol of Lublin’s socio-political past. Designed by architects Oskar and Zofia Hansen and built between 1960-66 under the Soviet regime, the estate was an experiment in socialist idealism. An expression of ‘Open Form’ philosophy, it was designed to be adapted, re-planned and rebuilt by residents as their needs evolved over time. The philosophy put art and creative imagination at the centre of mid-century urban life and the estate featured artist studios at the top of each apartment building. Frustrated by challenges common to public projects under the Soviet regime, the architects’ plans for the estate were never fully realised. The artist studios lie vacant or have been repurposed, and a cultural centre at the heart of the estate has been demolished and replaced by a church.

Today, the social and cultural dynamics of the estate reflect the growing conservatism in the country as a whole. It is this complex meeting of the estate’s history with more recent socio-political shifts that drew Meet the Neighbours (MTN) project partners Galeria Labirynt, working with curators Marta Keil and Grzegorz Reske (ResKeil), to select it as the location for their artist residencies.

After a preparatory visit in late 2018, Iwona and Janek visited the estate three times, in February, July and September 2019. Iwona describes their process as “being something like a radar to receive what the place is generating”. “That’s our method: to come to the place, to stay there for a while; to listen to the people, and the stories and everything come by themselves.”

They focussed their attention on the estate’s well-established vegetable market – a broad corridor of outdoor stalls where vendors sell nuts, fruits and fresh and pickled vegetables. More established stalls are protected by semi-official tarpaulin covers hung from the walls of adjacent buildings, and the artists’ original plan was to replicate this practice by designing hanging sculptures that could be displayed amongst the vendors’ roofs.

Iwona: “We were putting some models there and trying things out and, you know, measuring the wind. Of course, also being interested in attracting the attention of people, of the vendors…

“Out of this conversation there were more and more relations, and then somebody asked: ‘look, my cover is damaged. Maybe you could do something about it?’”

Iwona and Janek came to realise that the covers themselves were integral to the social and economic environment of the market. Not only do they protect the goods the vendors sell and demarcate one stall from another but they are a source of commonality, discussion and dispute.

Working directly with the vendors’ roofs opened up new lines of discourse and discussion between the artists and the vendors. The first cover they made was for a vendor called Oxana, who invited them to have dinner at her home that evening. When Iwona and Janek first arrived, rumours had circulated about how they were foreign investors intent on transforming the market, or political campaigners interested in branding stalls in support of their party. After meeting Oxana, their conversation with the vendors became much more focussed and dealt directly with the social fabric of the market.

Janek: “…it was fantastic to see how this mechanism works, and even those who were very sceptical at the beginning, at the end they were telling us: ‘You could make a PhD out of this.’”

Their residency concluded with a performance for audiences of five people. It took place in one of the buildings that overlooked the market and was repeated throughout the day. After the performance, the audience were invited to enter the market and continue the practice of constructing and hanging the vendors’ roofs. As Iwona describes: “We were connecting the audience and the vendors, and they were building something together with us.” 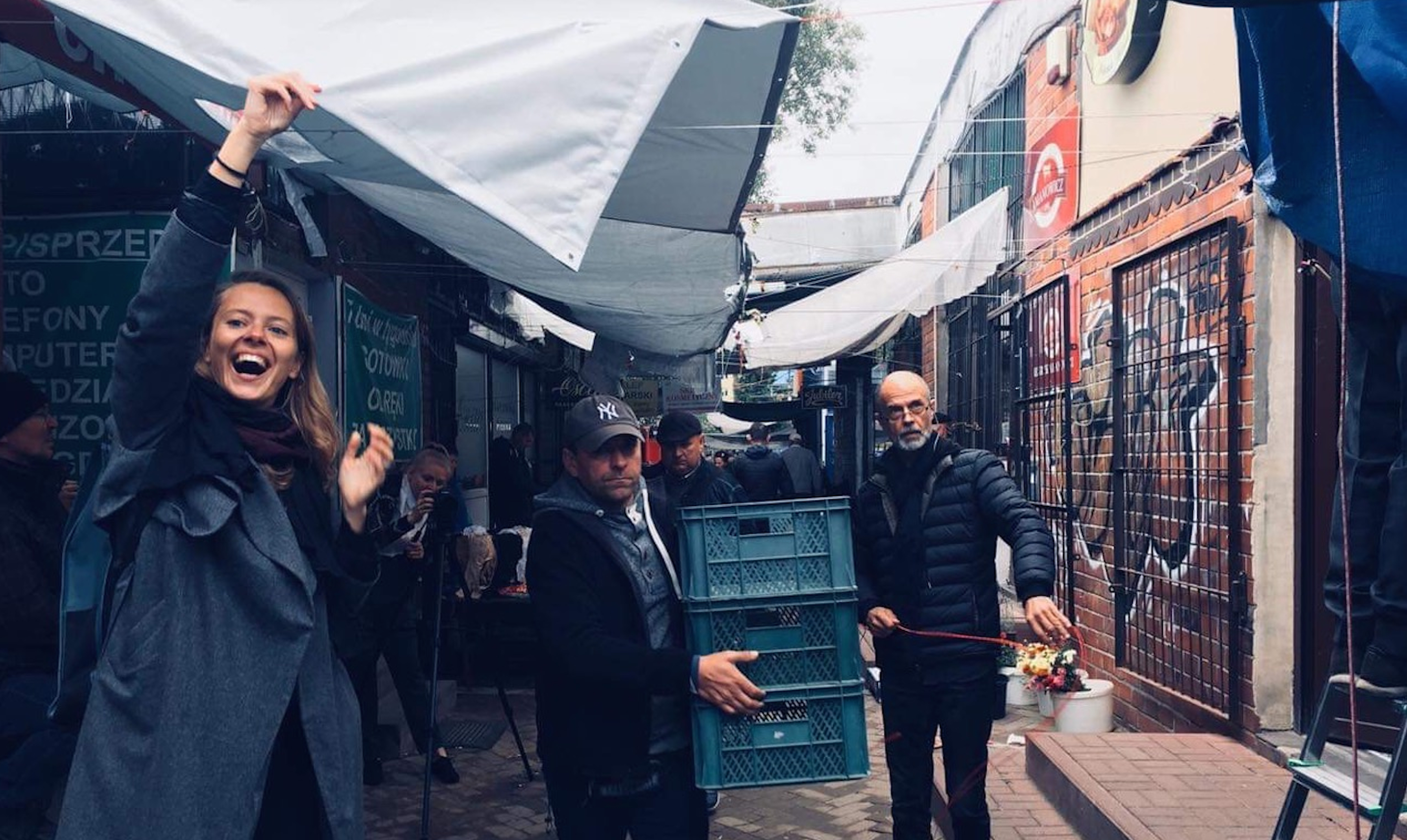 This residency was the first time Iwona and Janek had involved the audience directly in the making of work and supported the development of new creative methodologies that have continued to inform their practice.

The practice they developed in Lublin was not the practical construction of vendors’ roofs, or even the relational practices necessary to spend time in the estate, but the shaping and directing of narrative. The estate is characterised by ‘traditional’ values and there is an inbuilt hostility towards change and the influence of newcomers. Historic differences can also mean that vendors do not often collaborate with or help one another. Rather than confront differences in value and perspective directly, Iwona and Janek drew on the practice of working with vendors’ roofs as a strategy that allowed them to participate in the daily life of the estate and, through this approach, introduce new ways of thinking about the social rules that govern the market.

Iwona: “I would say the most important thing is this story that can be told by them… There is still this impulse for them to be together because of us, because we are also a subject to talk about… They had this situation that they are them and we are us, so they are closer together because they are in front of us as a group.”

Iwona and Janek describe the process of narrative shaping as the building of a legend. The legend is not about the artists specifically, but about their presence in the market and, crucially, is told by the people who construct and understand that environment – in this case the vendors. The artists’ role is to disturb conventions of behaviour and social order with their presence and provide a focal point that encourages neighbours to rethink and reform their relationships to one another.

Iwona and Janek worked across contexts for MTN and continued to develop this practice in Manchester, UK when they took up residence in Quarantine’s Tenancy house.

Here, they took a similar approach, capitalising on the novelty of their presence to stimulate stories and discussion about the Irwell Riverside estate, where the house was located. In addition to a performance presentation that took place in the Tenancy house, there were two notable outcomes that illustrated the influence of their approach.

In the first, they curated a display of pickled vegetables in a window of the Tenancy house. The vegetables were imported from sellers at the Juliusza Słowackiego market and were pickled using traditional methods that would be familiar to many Polish families. The display provoked discussion with Polish immigrants in the area who have, in turn, decided to revive the practice in Manchester. Iwona: “They continue our project because they are now working on an exhibition of jars in their window.”

Secondly, they met Robert, an amateur photographer with a vintage camera he had never been able to make work. As they helped him to repair it, other neighbours heard about the project and wanted to take part. Eventually a small network of hobbyists formed and began to meet regularly to contribute their experience and expertise, and the first photographs were taken with the restored camera on the final day of Iwona and Janek’s residency.

Just as in Lublin, the artists made strategic use of their outsider status to provoke discussion and difference in the environments in which they were working. As they explain, outsiders have a special permission to ask questions or confront habits of space and social context in ways that local neighbours might not feel safe or willing to do:

Iwona: “And this is why, actually, the residency was wanted because, you know, artists are wanted to be critical about where they are invited.”

Janek: “And we believe that words – they stay.”